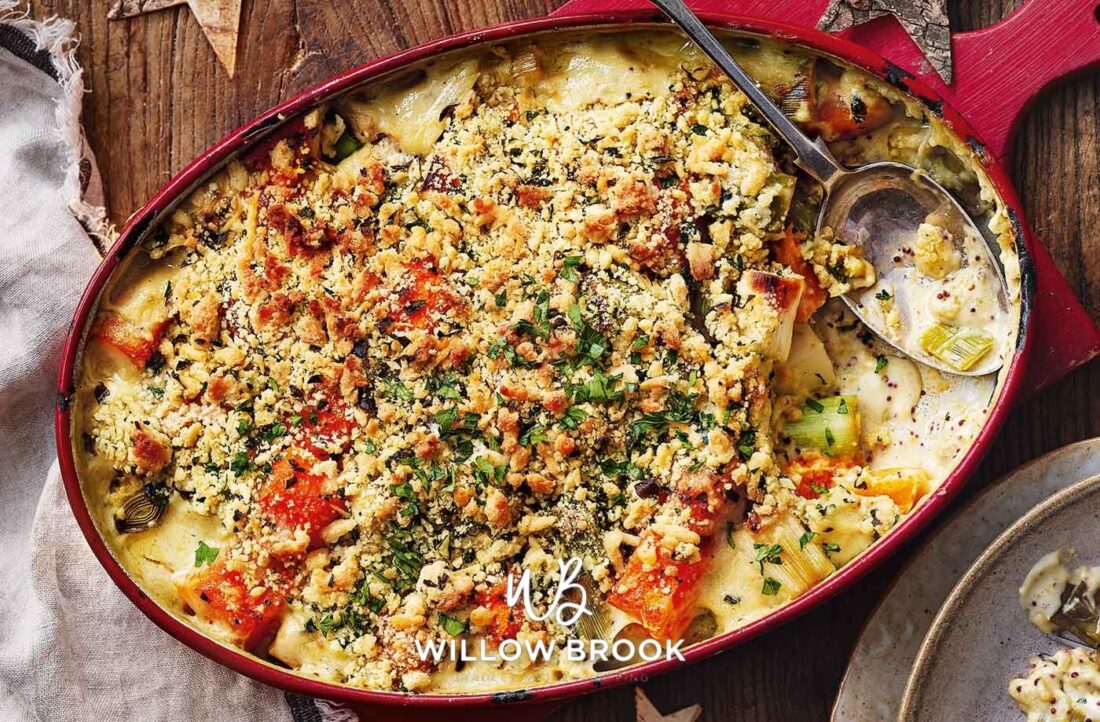 Are you bored of the same old Christmas dinners? Fear not, Tesco have got you covered during this festive season. Whether you’re looking for a vegetarian dish or a delicious alternative to a traditional Christmas roast, we’ve picked out 10 mouth-watering recipes to inspire you, from a colourful vegan stuffed celeriac, to hearty roast beef and succulent salmon.

No matter who’s coming for Christmas, everyone will love this stuffed celeriac main which has real wow factor but just happens to be vegan, gluten-free and dairy-free. Filled with cranberry-jewelled quinoa and served with a rich, nutty parsnip cream, this is a healthy, showstopper main that everyone can enjoy. 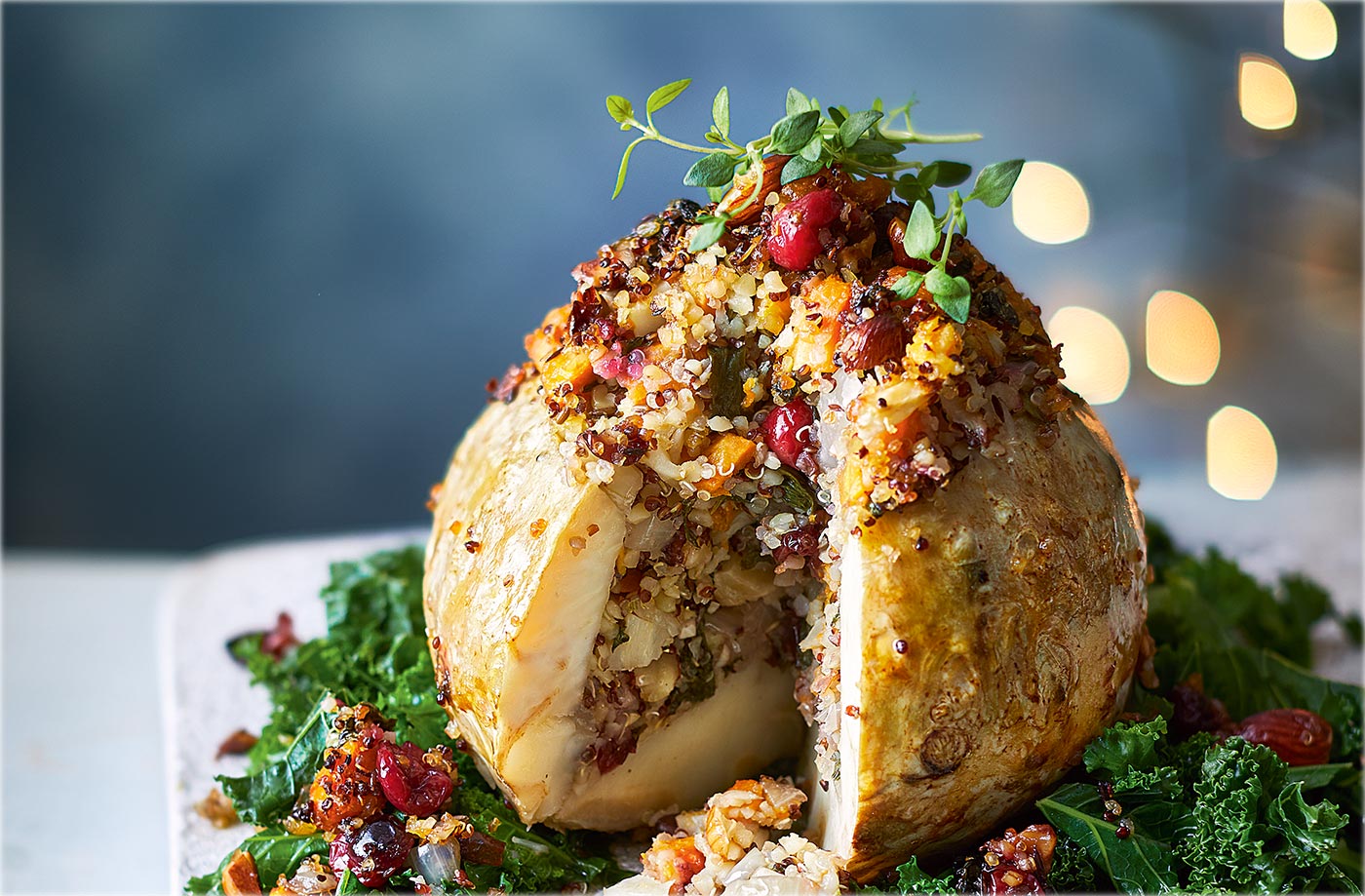 For the parsnip cream

This bold beetroot and goat’s cheese tarte tatin proves this classic French dish doesn’t have to be just for dessert. With tender caramelised beetroot, crumbly cheese and crisp puff pastry, this striking tart makes an impressive vegetarian main for sharing on Christmas Day. 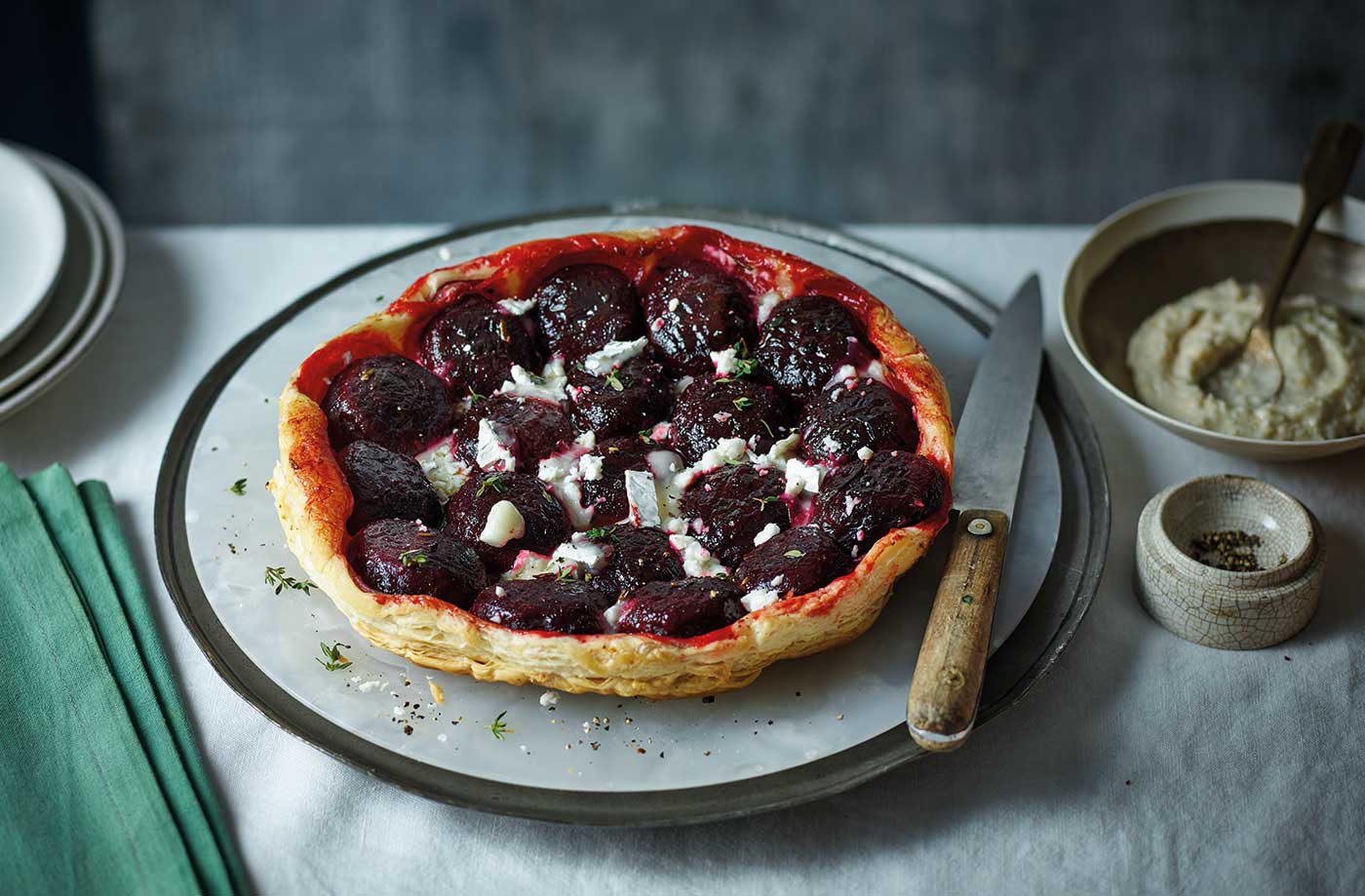 This tasty veg bake is so versatile you’ll be serving it time and again – as a vegetarian main course, a hearty side to go with Sunday lunch or as part of a Boxing Day buffet spread to feed a crowd. The creamy squash and leek filling is topped with a golden cheesy crumble, making a delicious change from your average roasted veg. 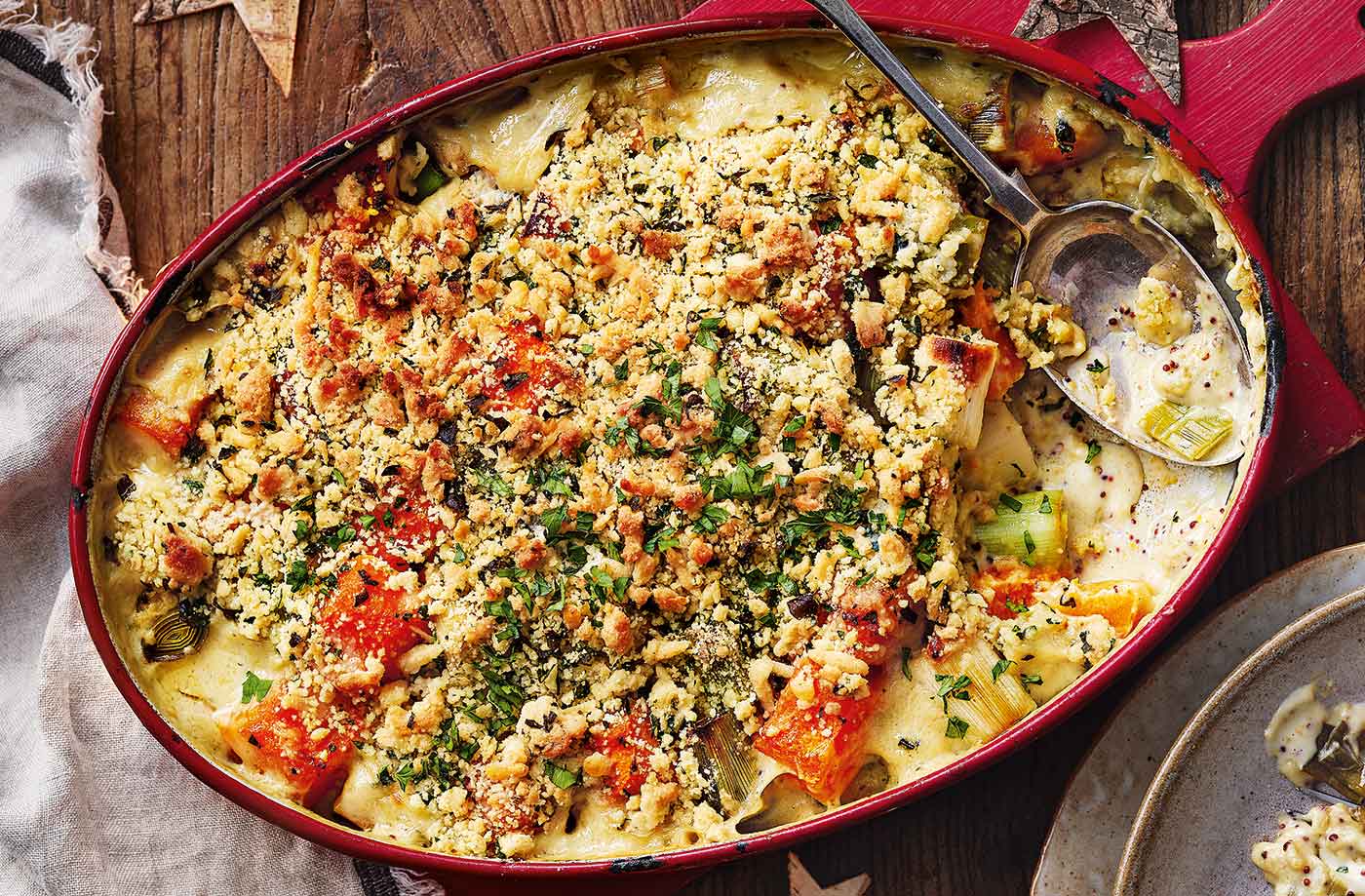 For the crumble topping

4.  Roasted Veg Toad in the Hole

This showstopper roasted veg toad-in-the-hole is made with gluten-free flour for an impressive gluten-free and vegetarian Christmas dinner. Make quick festive stuffing balls studded with cranberries and chestnuts, then bake with roasted red onions, beetroot, carrots and parsnips in a herby rosemary batter for a colourful Christmas centrepiece. 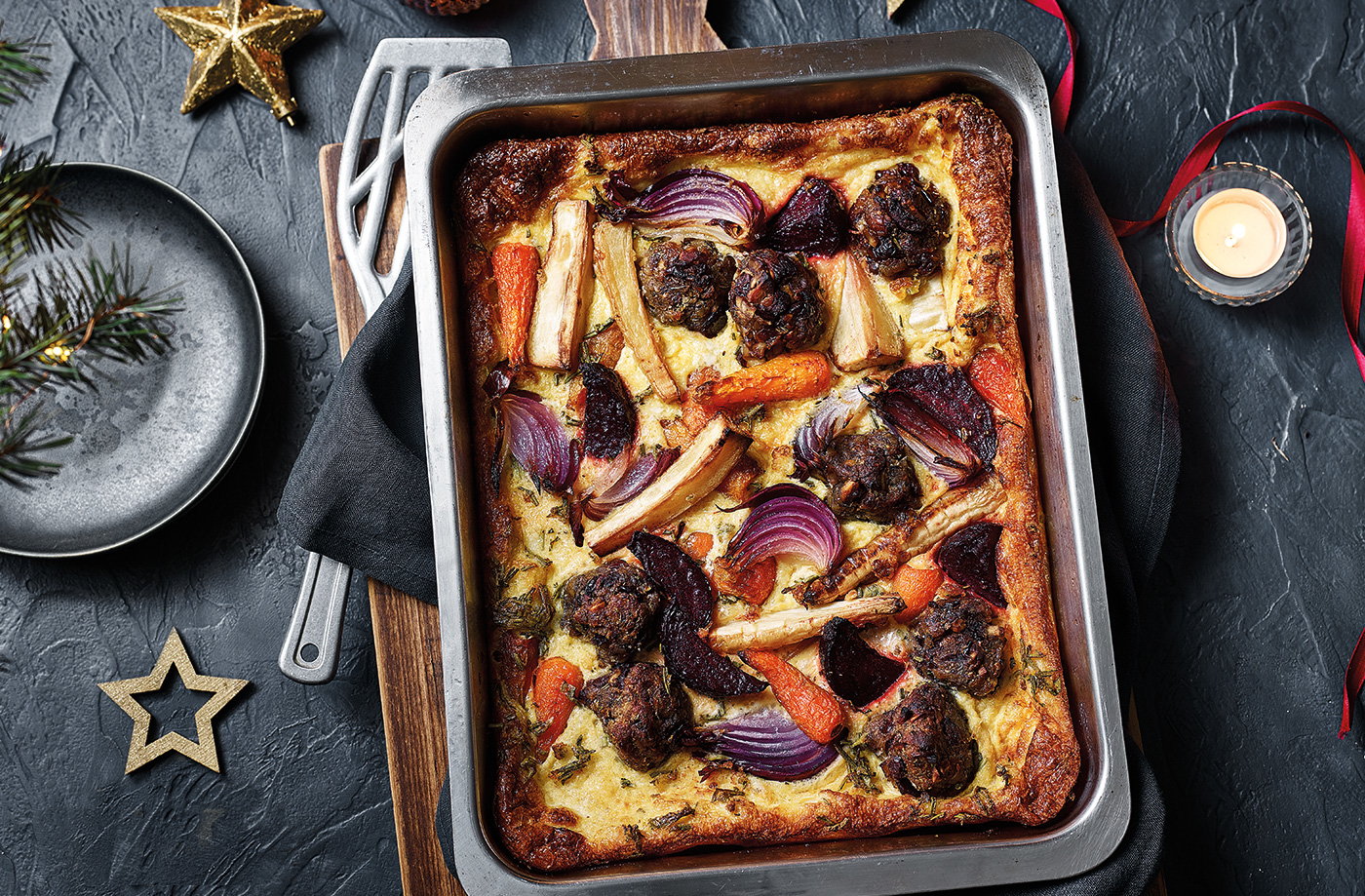 For the stuffing balls

Need a vegan centrepiece for your Christmas dinner? Make this cauliflower Kiev schnitzel recipe for the perfect partners to your festive sides. Golden and crisp breadcrumbed cauliflower steaks are drizzled with herby garlic oil for a vegan twist on a retro classic. 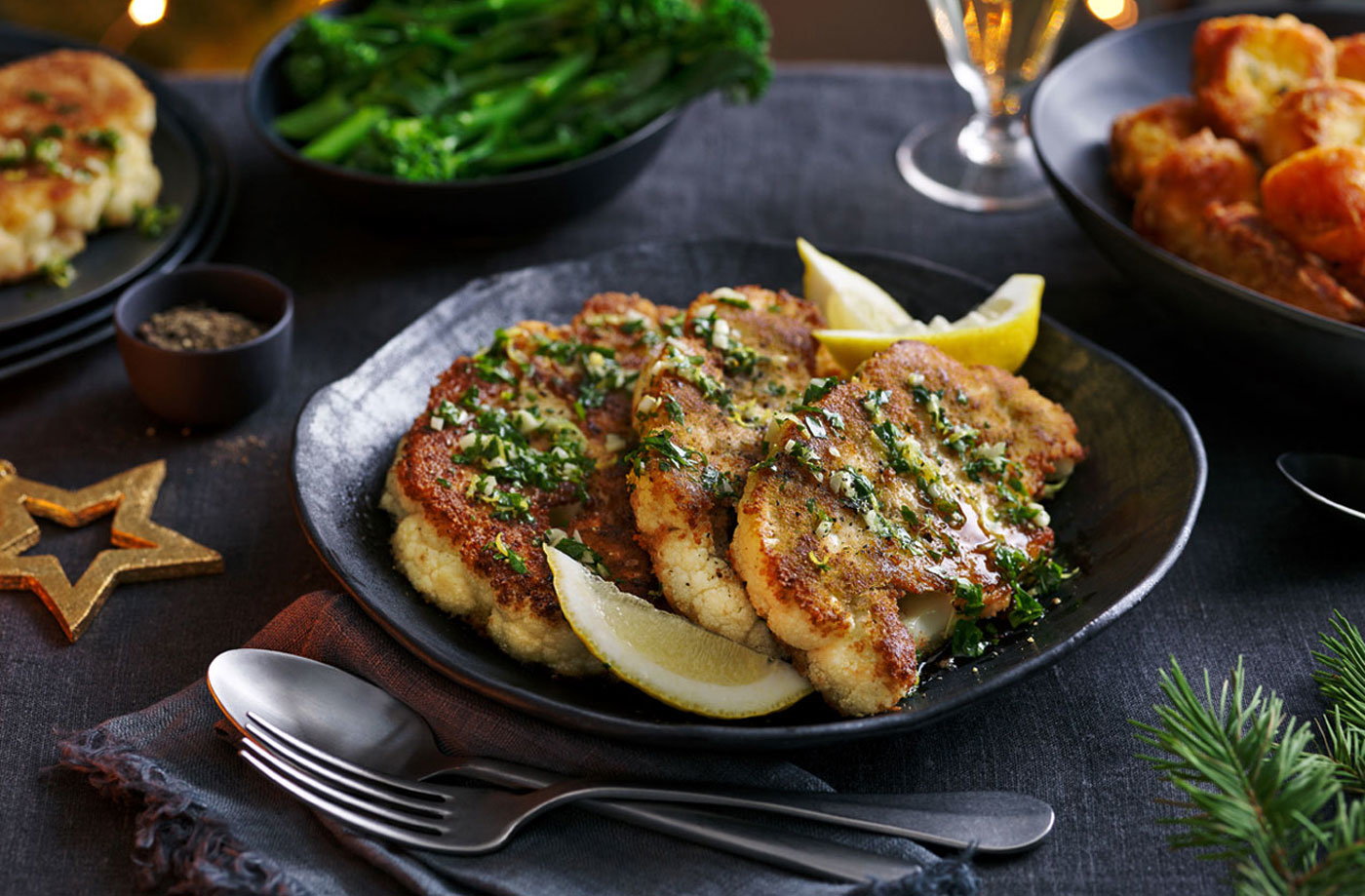 For the garlic oil

It’s hard to beat a baked ham at Christmas, whether for a Boxing day buffet or as an alternative to the traditional roast turkey. This one has a sweet and sticky cranberry and mustard glaze, a port sauce and soft roasted pears. Serve with these honey and mustard bacon greens for a showstopper main. 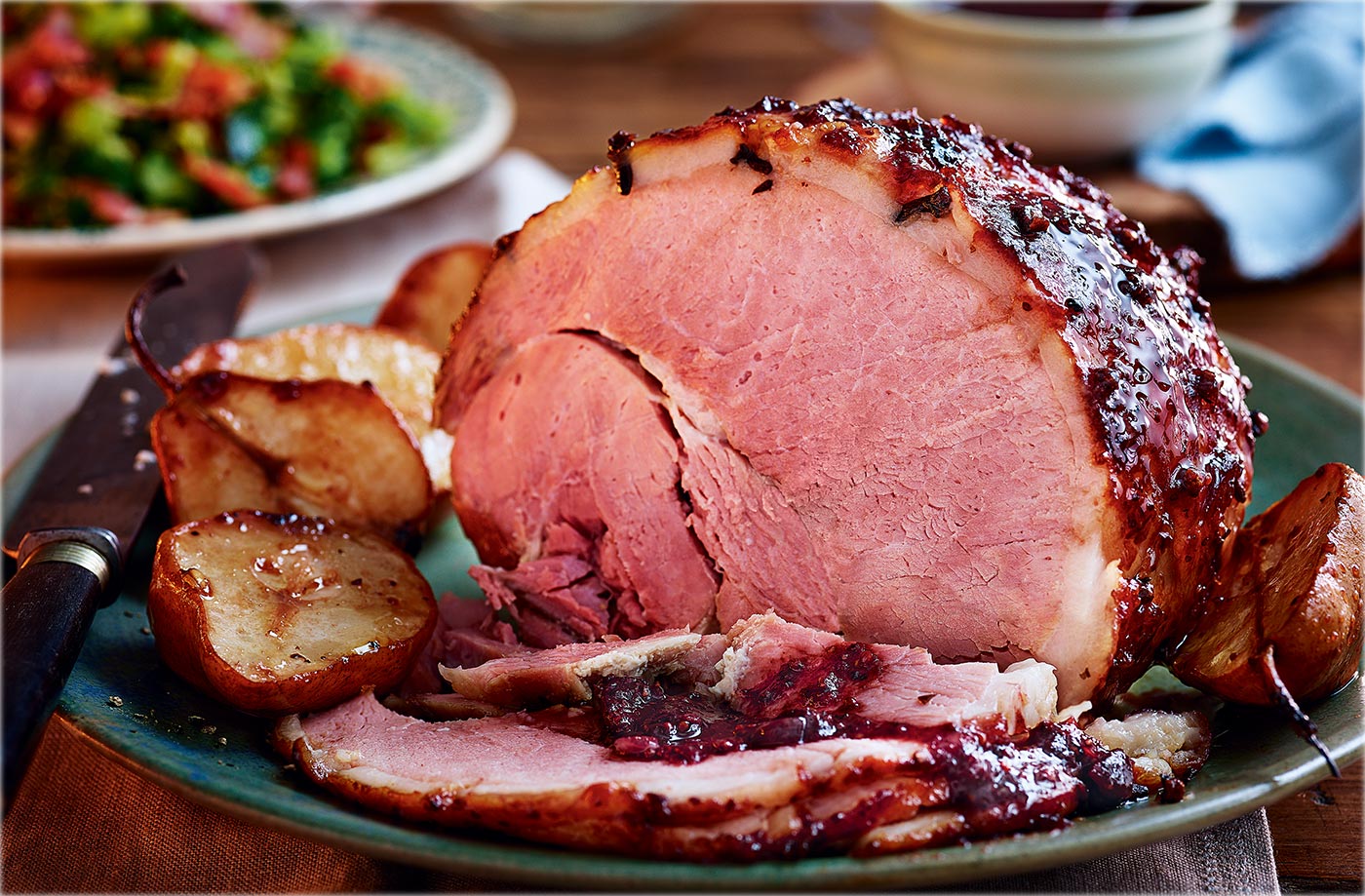 For the sauce and glaze

For the bacon greens

2.  Spiced Roast Duck with Clementine’s and a Maple and Mustard Glaze

Slow-cooked until tender and coated in a mouthwateringly sticky glaze, this duck is a stunning centrepiece to serve up on Christmas day. Serve with roasted shallots, juicy clementines and cinnamon sticks for a wonderfully festive main. 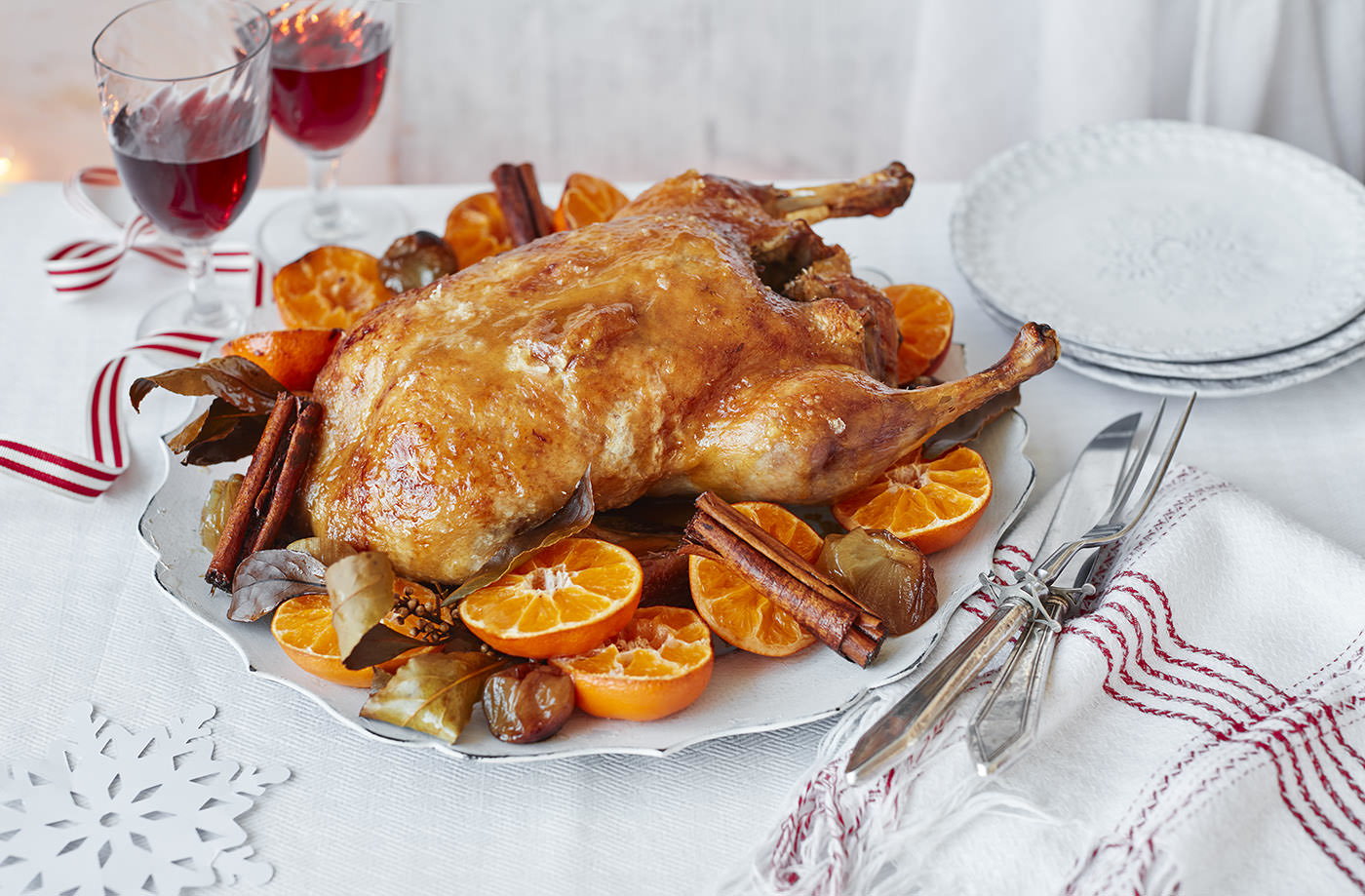 Tip: To peel shallots easily, submerge them in a saucepan of simmering water for 50-60 secs. Drain, cool then trim the root ends – the skins will slip off no problem.

Fed up with turkey? Mix it up this year and serve this succulent pork Wellington recipe with cranberry, pistachio and pork stuffing. This dairy-free main is easier than it looks and makes the most of pre-made puff pastry to save time. Get creative with the pastry offcuts before baking until golden and cooked through. Christmas dinner doesn’t get better than this! 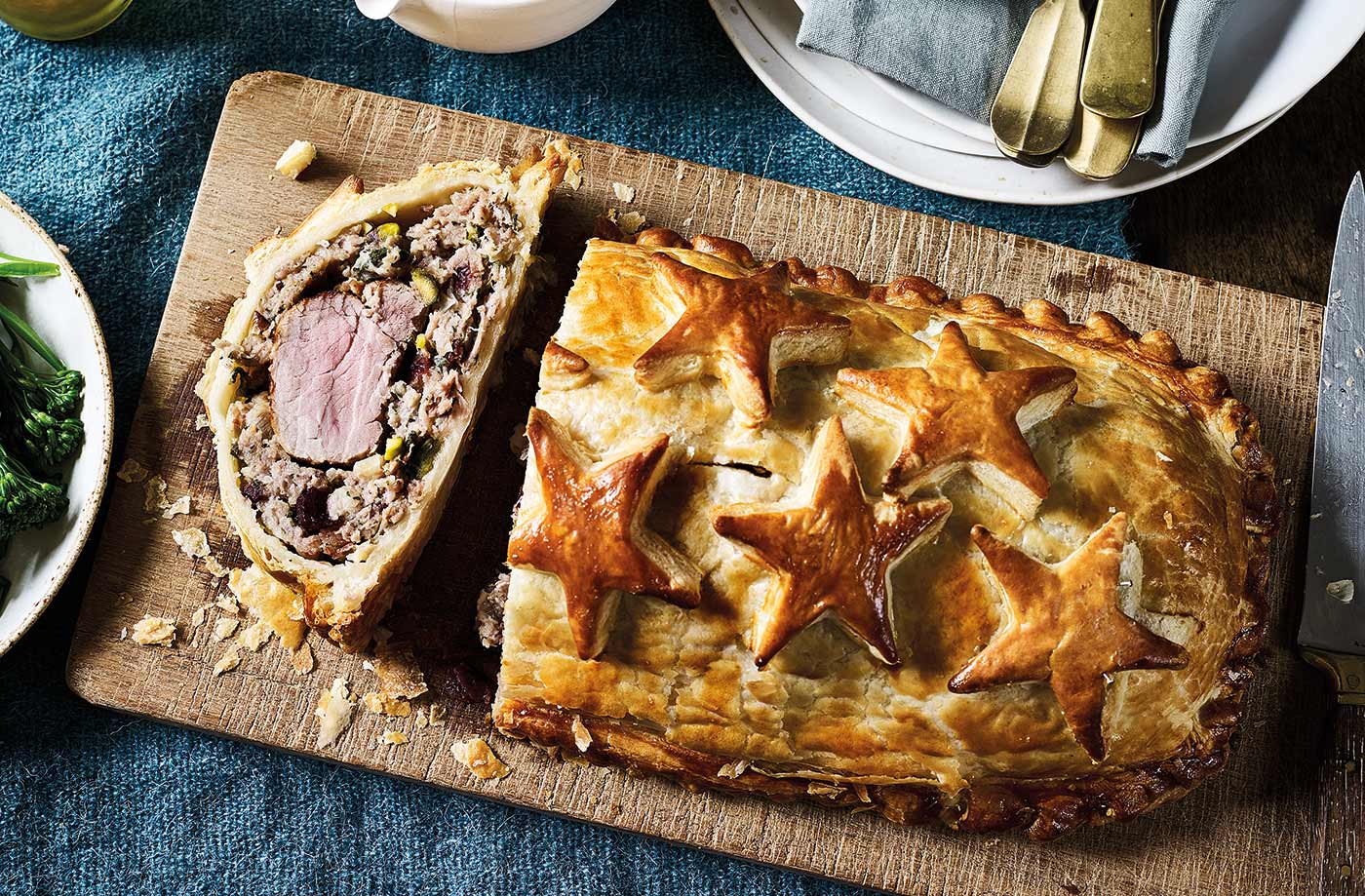 For something a little different this Christmas, try this showstopping turkey porchetta recipe for your Christmas day main. Easier than cooking and carving a whole bird, turkey breast meat is rolled around a fragrant herb stuffing and wrapped in pancetta. Served with sweet caramelised clementines, it makes a colourful Christmas feast. 60g fresh herbs (such as flat-leaf parsley, sage and thyme), finely chopped, plus extra to serve

If you’re not having turkey this year, try this showstopping sticky pomegranate-glazed roast beef for an alternative Christmas dinner recipe. Classic roast beef is given a glossy pomegranate glaze for a sweet and tangy Middle Eastern spin. 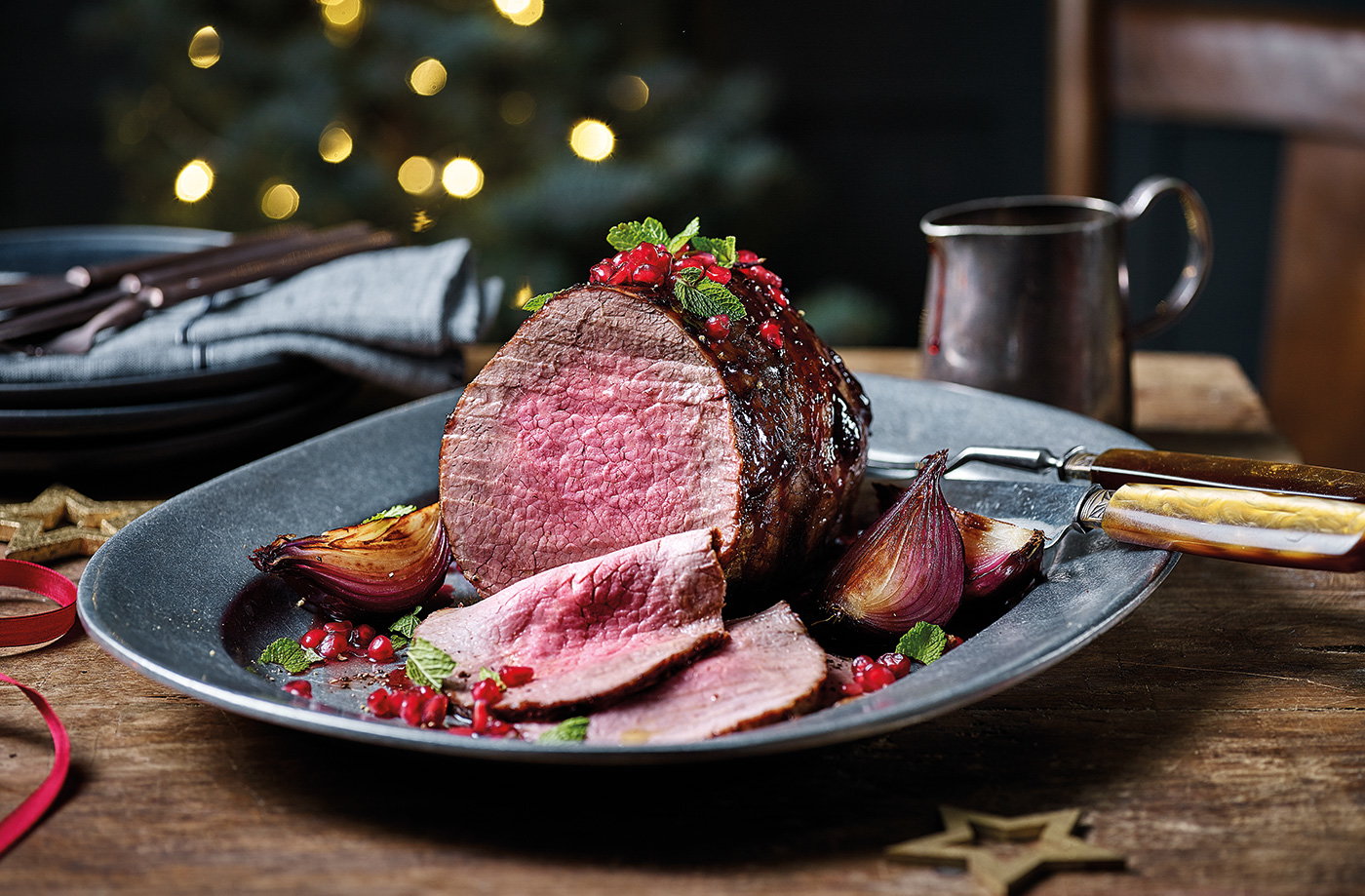 Pull out all the stops this festive season with a stunning salmon centrepiece. Lightly baked salmon topped with creamy spinach and toasted almonds, all wrapped up in buttery pastry – this alternative Christmas dinner is sure to be the star of the show. 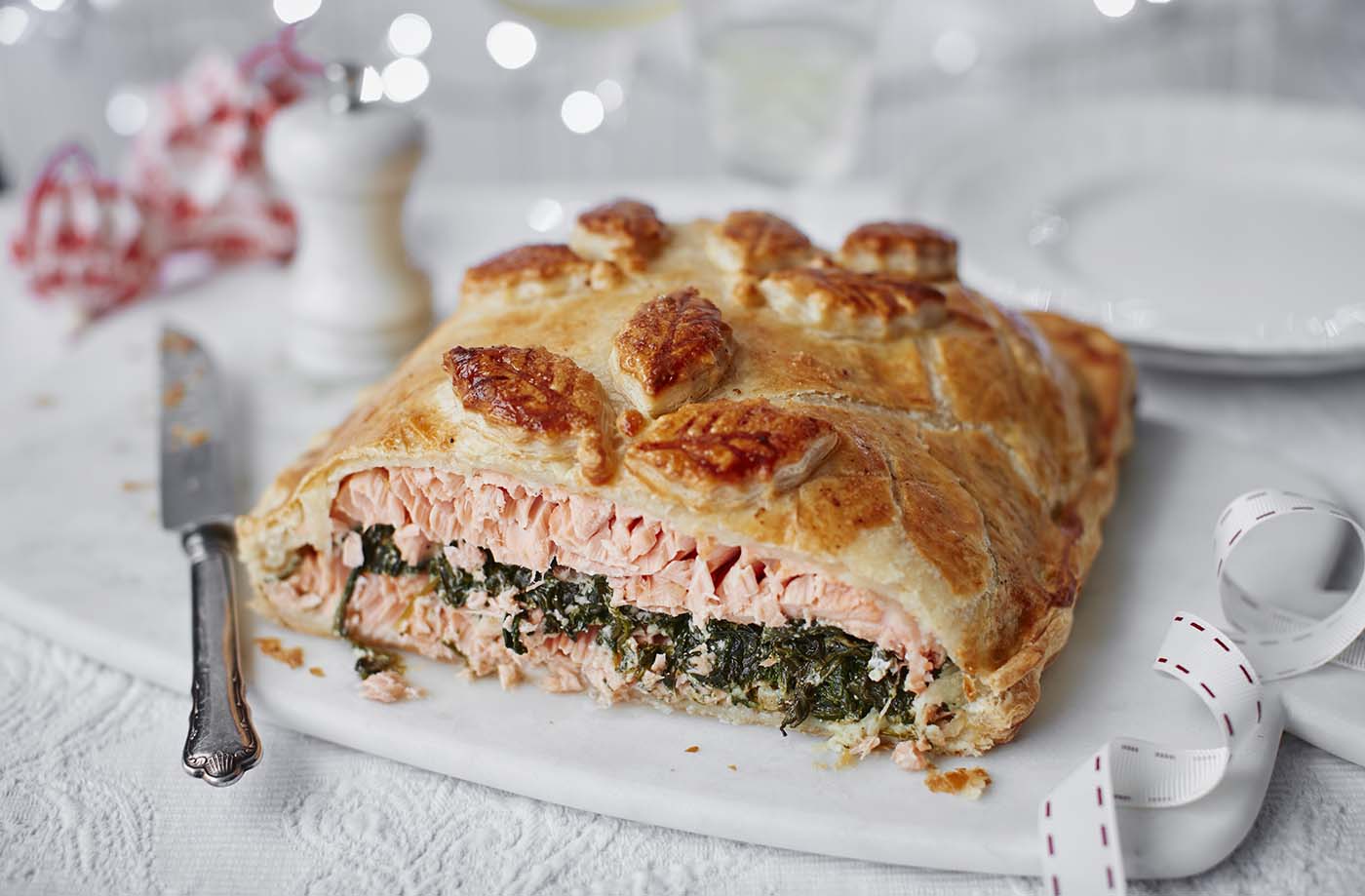 For an alternative Christmas main that’s super special, try this delicious side of salmon recipe. Bejewelled with toasted almonds, seeds, dill and capers and finished with a creamy prosecco sauce, this stunning dish will definitely impress. What’s more, it’s ready in under 1 hour and totally gluten-free. 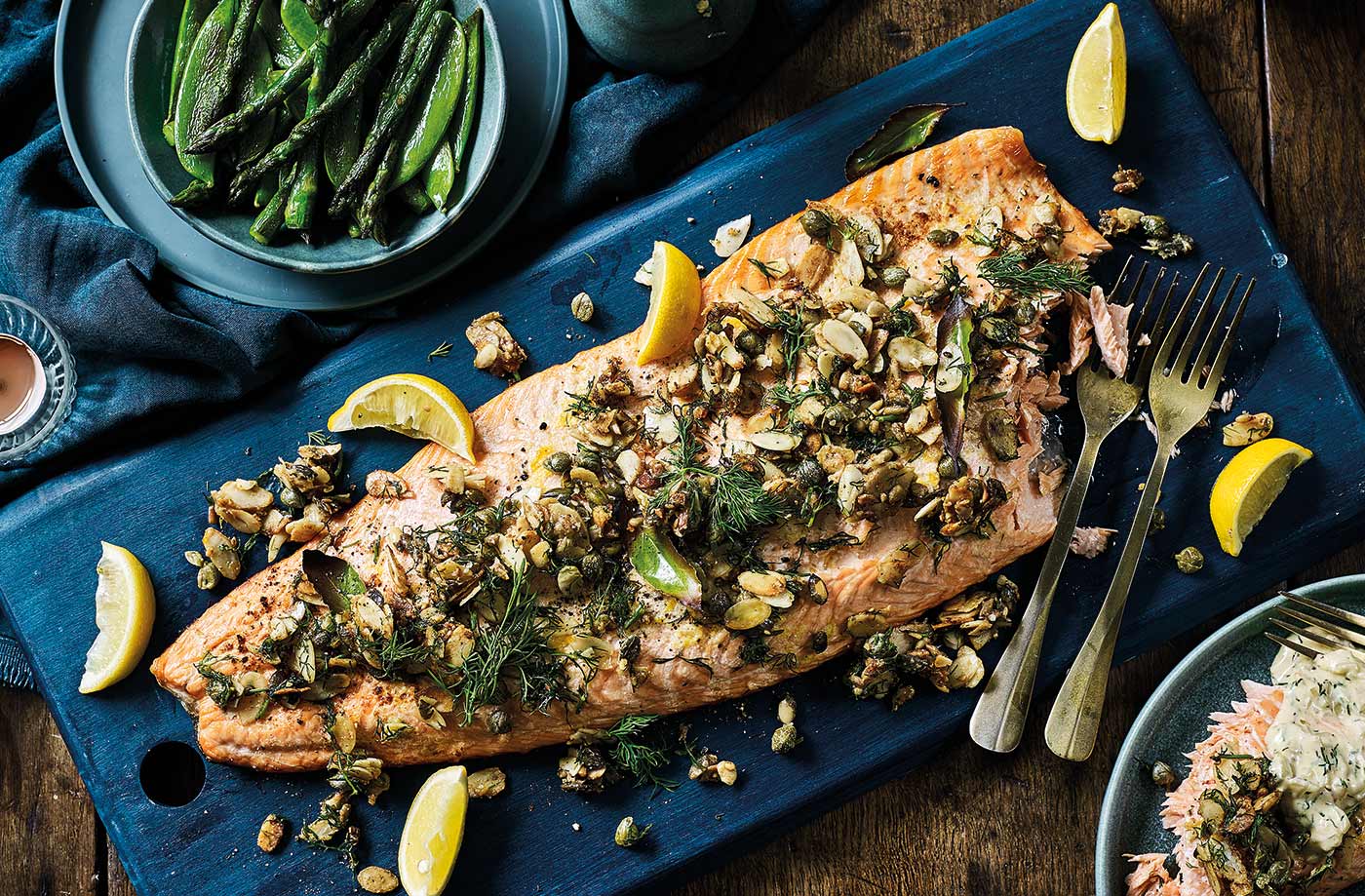 2 lemons, zested, plus wedges to serve

Try something new and impress your guests this Christmas with an alternative roast dinner starring delicate, zesty salmon. Pair with crispy hasselback potatoes and caramelised fennel, and serve with homemade beurre blanc. This easy Christmas dinner idea is completely gluten-free and ready in just 1 hour, so you can make the most of the festivities. 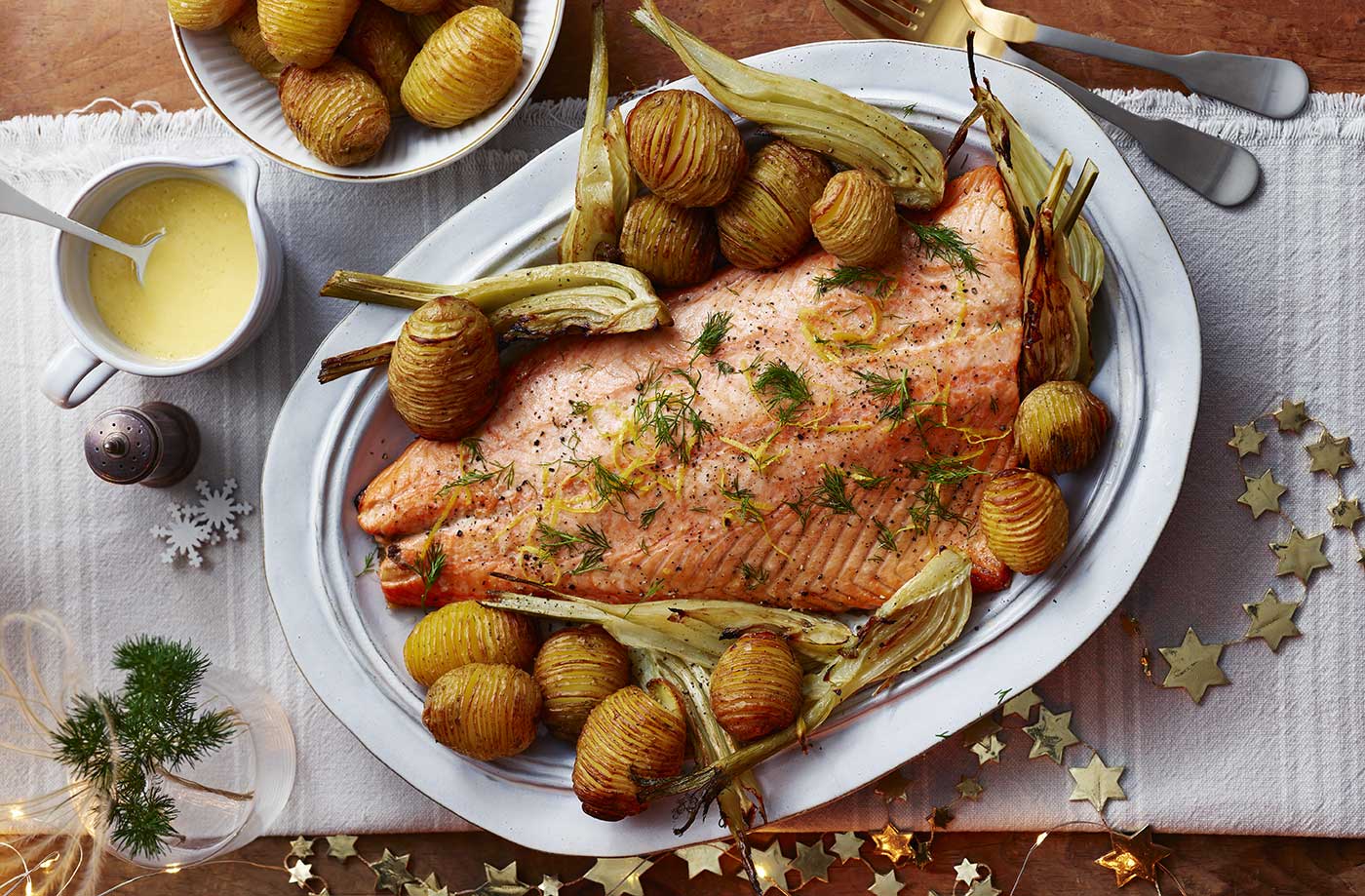 This hearty rice-stuffed salmon makes an impressive alternative main to rival the classic turkey at Christmas, or to feed a crowd on any special occasion. Served with a crunchy green bean, pecan and pomegranate salad and tangy buttermilk sauce for a delicious mix of flavours and textures. 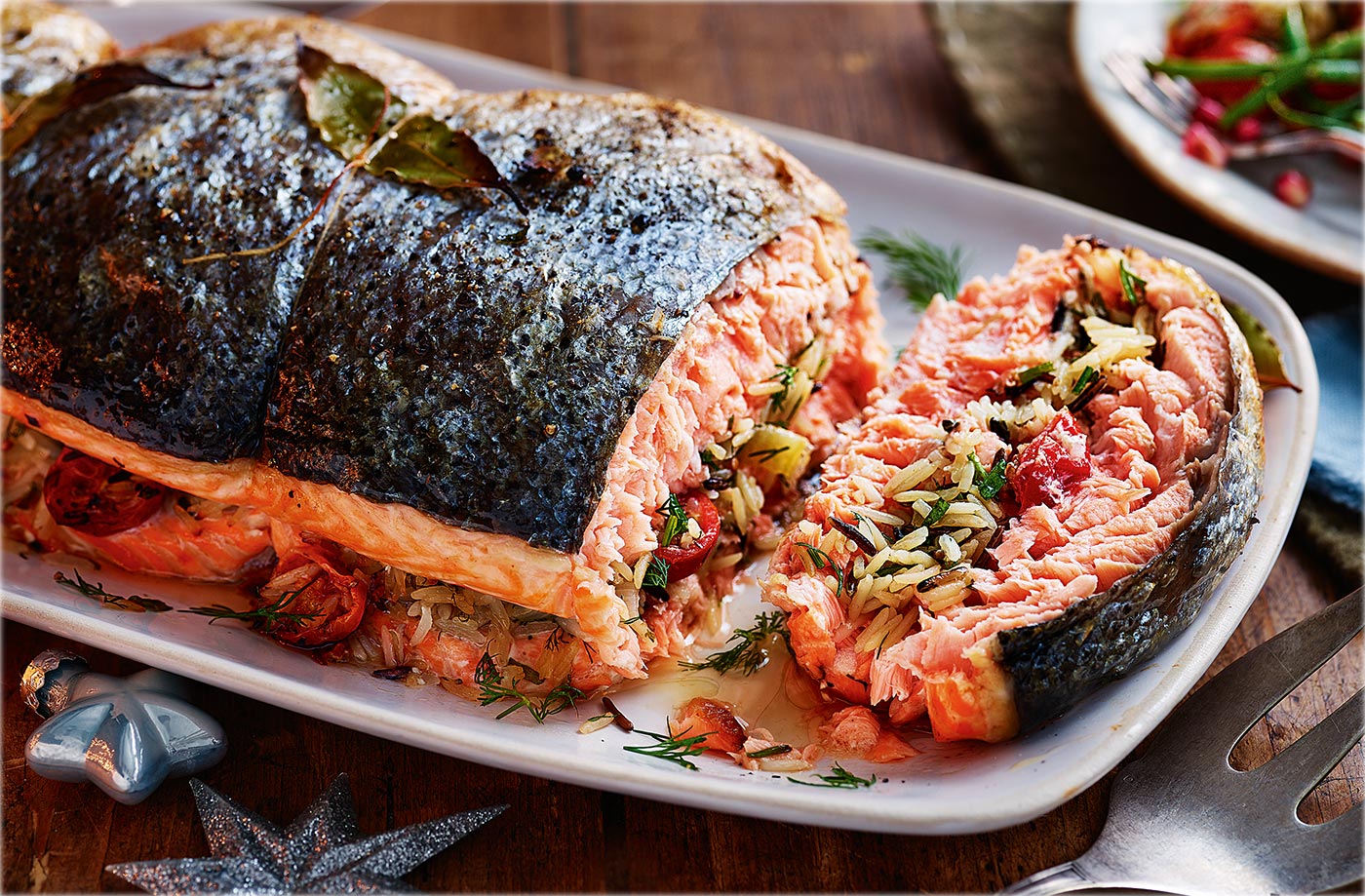 5.  Spice-Crusted Salmon with Parsley and Pomegranate

Bring the wow-factor to your Easter lunch with this sweet-spiced roasted salmon. The fish is first rubbed with cumin, cinnamon and sumac before being topped with sourdough breadcrumbs to make up the crust and rounded off with a gorgeous pomegranate dressing. 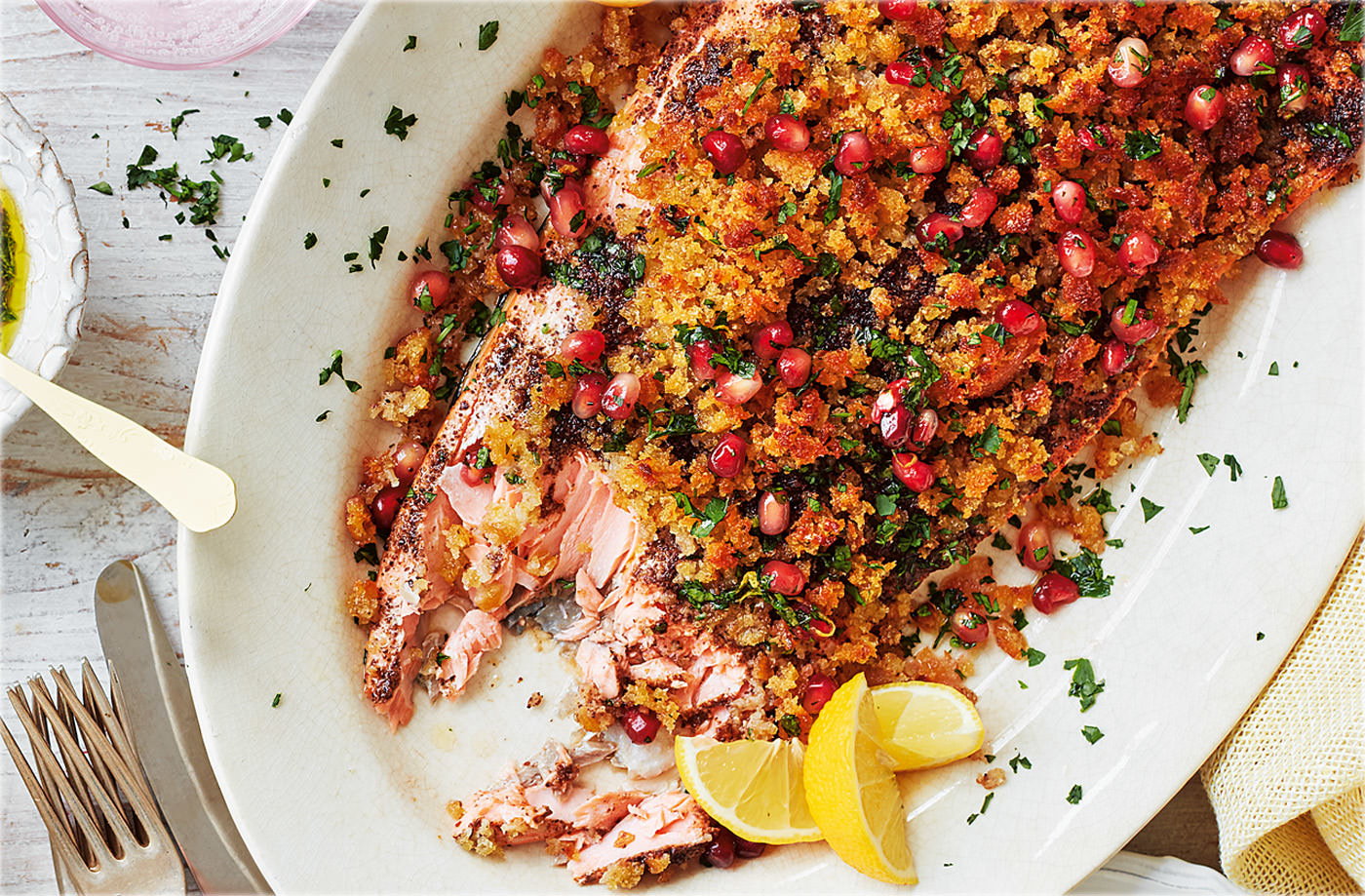 For the pomegranate dressing

Tip: If you can’t find a 1kg salmon side, the spice-crusted salmon can also be made with two 500g sides.

Prepare this stunning centrepiece to impress your vegan guests on Christmas day. Roasting a whole butternut squash, scooping out the sweet flesh and then filling with layers of chargrilled peppers, mushrooms, chestnuts and spinach is really easy to do, and gives impressive results. Serve this vegan Christmas recipe with homemade pesto for an extra flavour kick. 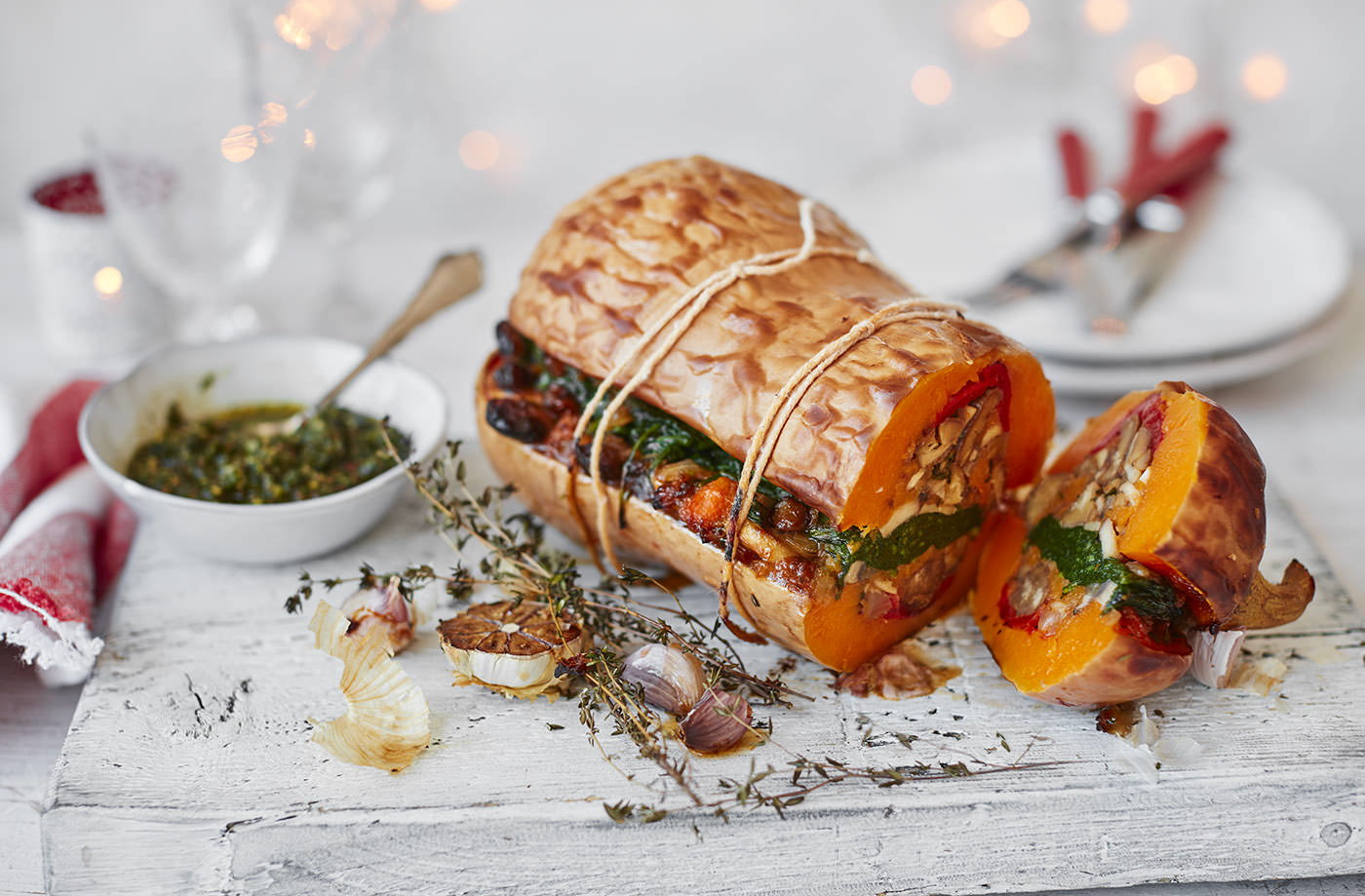 3 garlic bulbs, halved through their middles

Swap out nut roast and serve up this vegan mushroom hotpot for an alternative Christmas main. Totally vegan and gluten-free, the intense veggie filling combines mushrooms, swede and lentils in a rich porcini gravy, topped with crispy golden potatoes for a striking vegan Christmas dinner highlight. 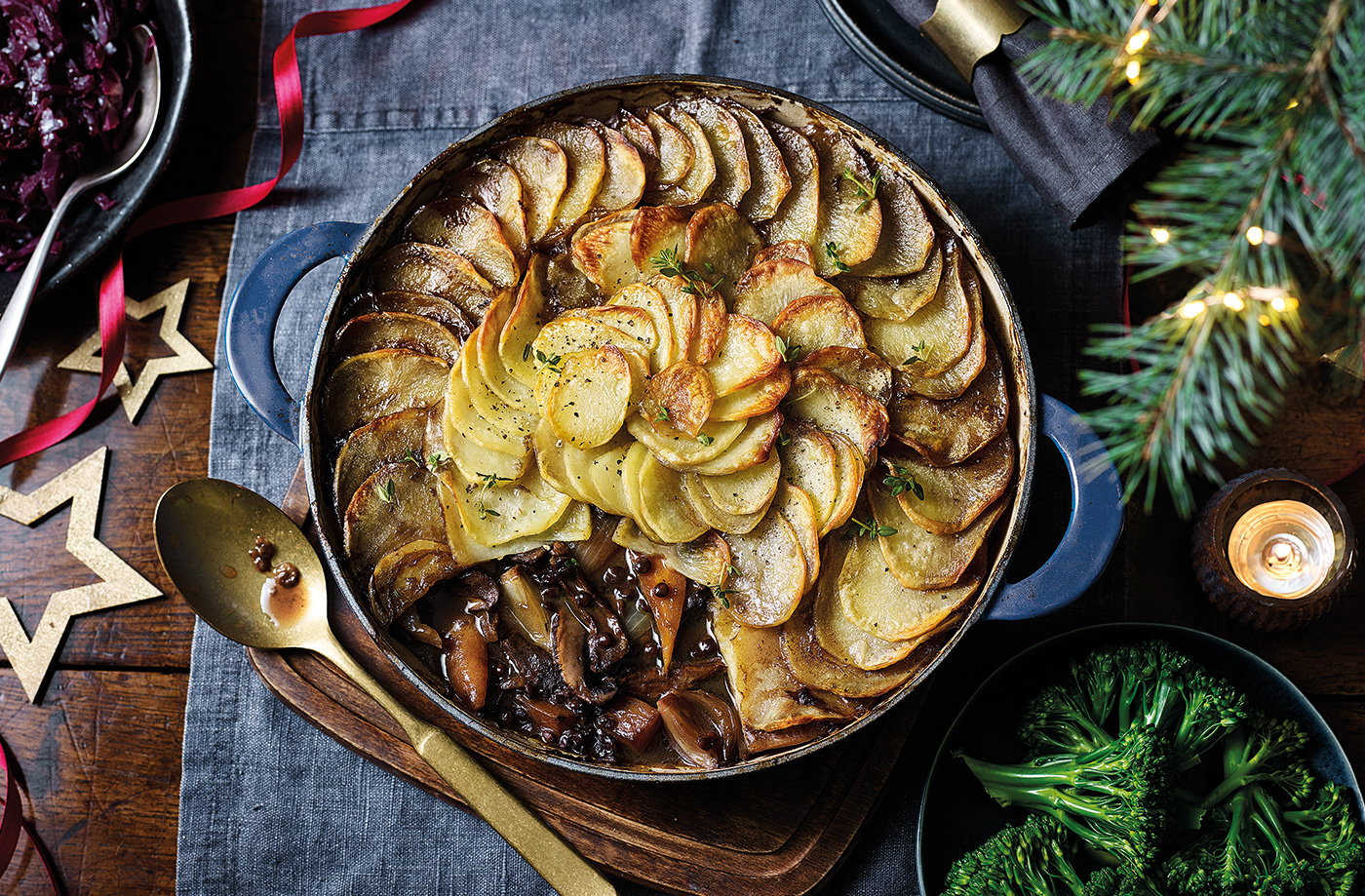 200ml vegetable stock, made from one stock cube

A nut roast is a fantastic alternative to a meat main course or traditional Christmas dinner. This delicious vegan nut roast recipe is full of hearty veg – butternut squash, aubergine, red pepper – as well as nuts, herbs and green olives for flavour and texture. Cooked in a round tin, it makes a showstopper main with its bright pomegranate garnish. What’s more, it’s vegan-friendly, too. 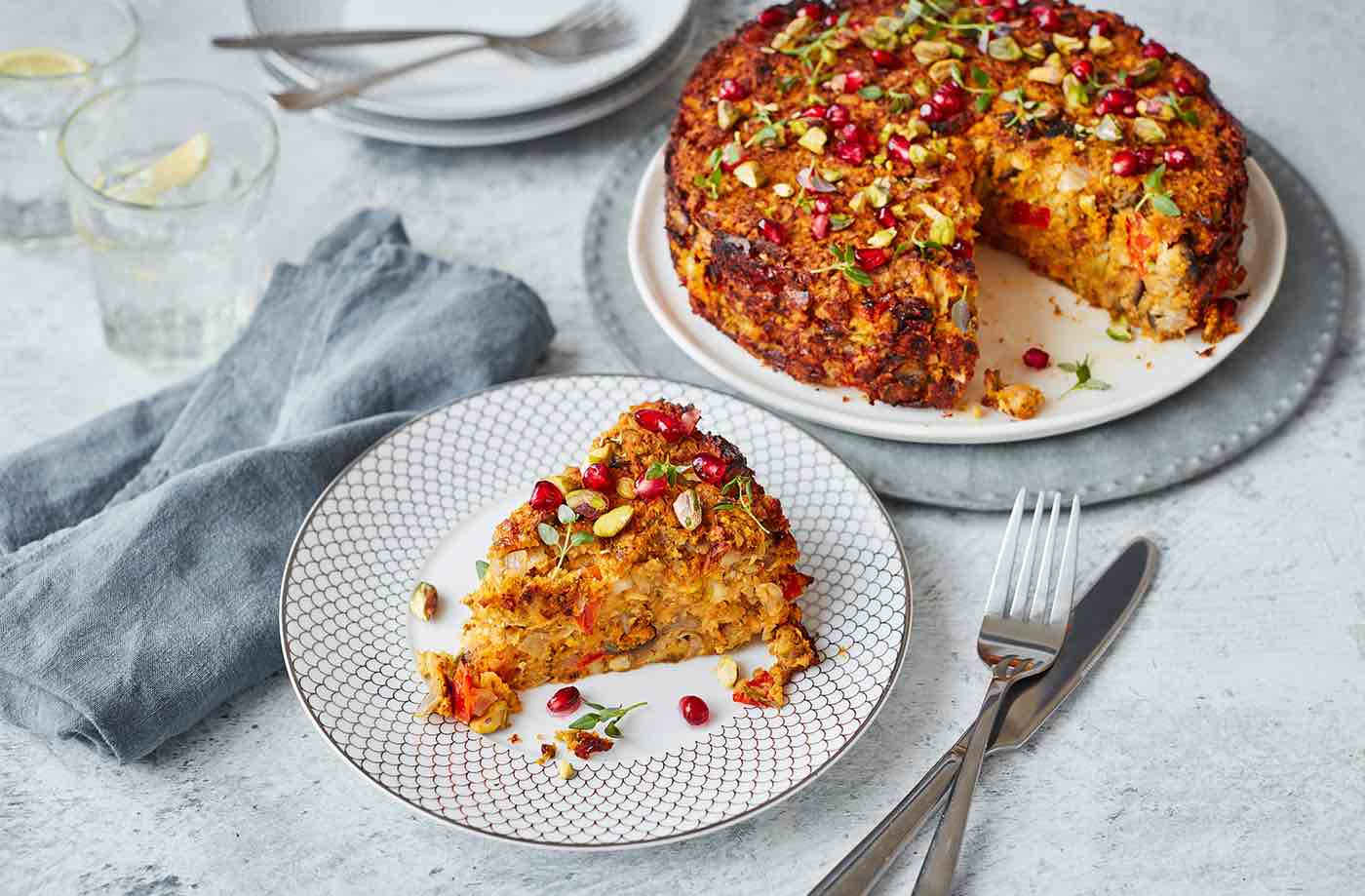 Freezing and defrosting guidelines: Once the dish has cooled completely, transfer it to an airtight, freezer-safe container, seal and freeze for up to 1-3 months. To serve, defrost thoroughly in the fridge before reheating. To re-heat, loosely cover with foil and bake until dish is thoroughly heated through. Re-heat until piping hot.

Derek Sarno has the ultimate roasted butternut squash recipe for a mouth-watering vegan Christmas feast. Coat the roasted squash in a black pepper and smoky paprika rub and serve with a creamy cauliflower and garlic sauce that’s flavoured with truffle oil for extra indulgence. 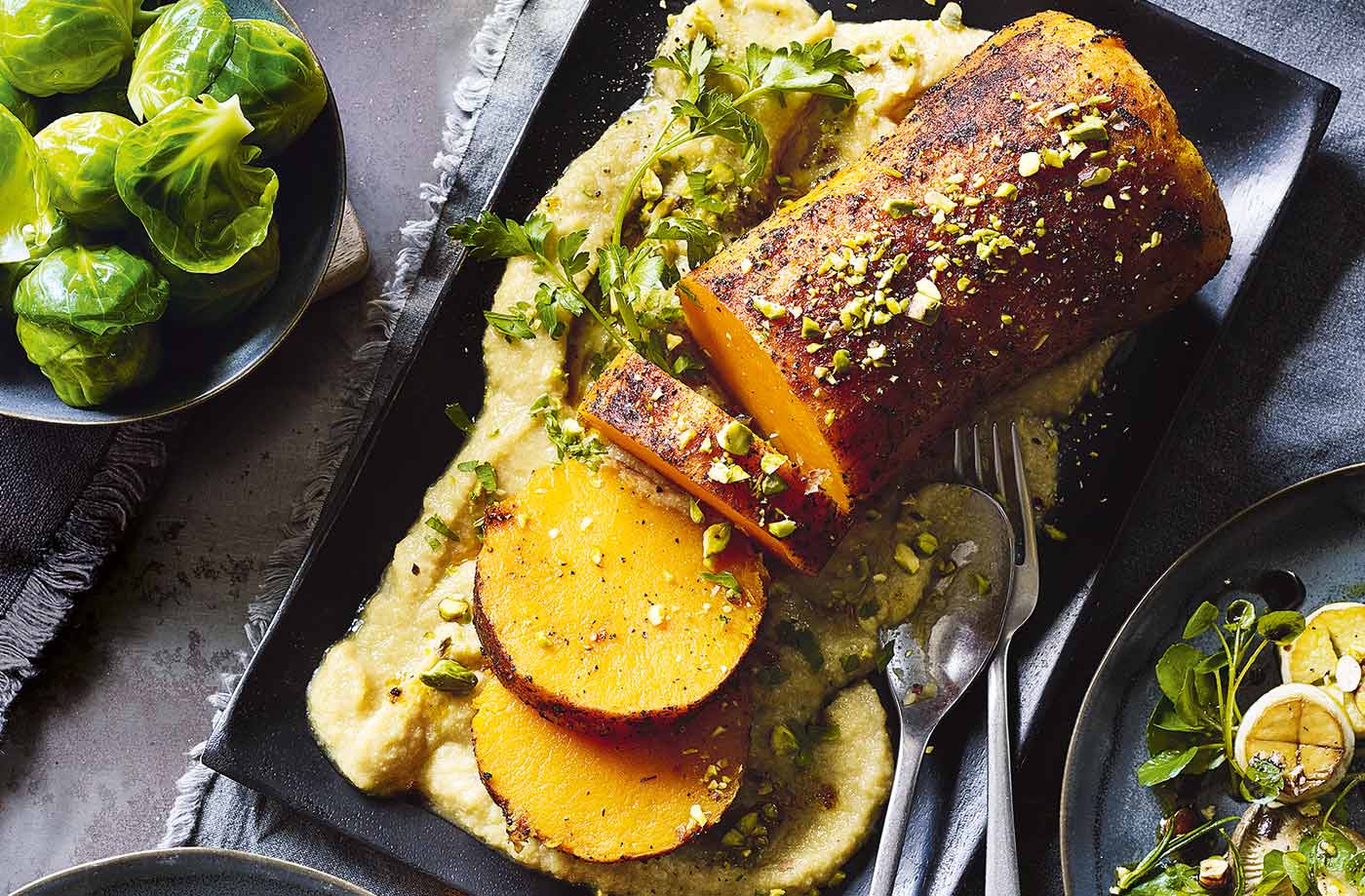 Looking for a vegan main for Christmas this year? Give an American meatloaf a vegan makeover with this Moroccan lentil ‘meatloaf’, filled with walnuts, mushrooms and sweet potato and coated in a spicy harissa tomato sauce for a festive centrepiece.